Home | DR DIARY | THE YEAR OF...
2016 has been an exciting and eventful year, it’s hard to believe that it is already coming to an end. In terms of fashion, we have seen so many older trends come back around and make their way into the mainstream. Everything old is somehow new again always. A huge trend that crept its way onto everybody’s social media pages is a t-shirt under a slip dress. This trend became so popular and widely demanded that stores actually began selling slip dresses with t-shirts sewn to them! Denim miniskirts also became huge this year. There’s so many variations to denim skirts them that everybody could find one to fit their personal style. Culottes became widely popular, although this is a trend that’s a little hard to buy into if you’re below the height of 5’4. Bardot (off the shoulder) tops and dresses are another huge trend of 2016. They’re simple and fun, and make every outfit a little sexier. One huge trend that we’ve seen more recently in 2016 is velvet. You can find literally anything and everything in velvet. From shoes, to dresses, and even chokers- which brings us to our biggest and final favorite trend of 2016: chokers. Chokers have become so popular this year that you can't walk into a store and not find one. From luxury brands to fast fashion, chokers come in a staggering amount of colors, styles, and materials. It’s a trend that is flattering and easy enough for everybody to partake in while being a simple way to accessorize any outfit. 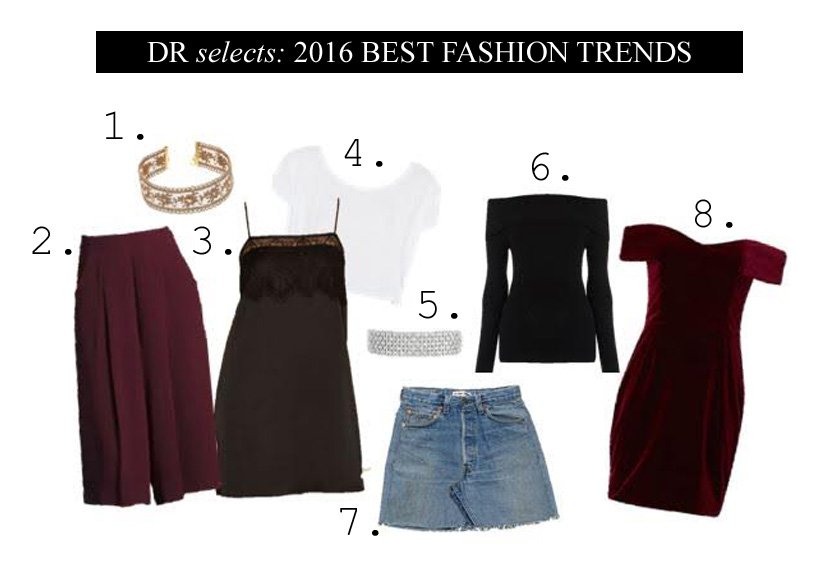